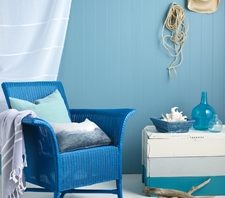 What's your favourite colour? Everyone has one, even the world! A YouGov survey conducted a worldwide study  to learn what everyone's favourite colour was. The results found that in ten separate countries, blue was picked more than any other.

In fact, the colour blue is so important that it was even called out in the movie 'The Devil Wears Prada'. Magazine Editor-in-chief Miranda Priestly, aka Meryl Streep, scolds her new assistant, Andy, aka Anne Hathaway, who naively assumed all fashion looks the same. What follows is an uncomfortable history of how blue isn't just blue but, it's cerulean.

This scene, asks a good question however, and that's why blue the most well-liked colour worldwide? Read on to learn about the story behind blue's popularity.

The earliest civilisations never used the colour, they didn't even have a name for it, reports the Guardian magazine. Everyone just stuck to the more natural colours they could find around them. Blues were really only seen in the sky or perhaps in some berries, but it wasn't a colour they could harvest and use. That is until the Egyptians started mining their land and discovered lapis lazuli, a bright blue metamorphic rock. It probably looked something like Resene Decadence. As it was such a rarity, it was only used to decorate the tombs of the pharaohs.

Because of it's scarcity, the Egyptians started experimenting with chemistry to try to get more of the colour, reports the New York Times. Combining limestone, sand and copper, they were able to produce a dark blue. After that others, like the Mesopotamians, Persians and the Greeks and Romans got curious, or rather Resene Curious Blue, and started to get in on the gig.

Meanwhile, Chinese and Mesoamericans were also toying with these new pigments. The Chinese would adorn their emperors in a colour that looked like Resene Endeavour – although scientists later found out that their concoctions were causing lead poisoning in their royalty. The Mesoamericans, however, used more of a Resene Bondi Blue on their sacrifices for the gods. They would dress the sacrifice in the rare colour before presenting to the gods. One thing is for certain, most cultures have held this colour in high regard because of its exclusivity. As years went on, blue was still reserved for the rich and noble. But now, everyone loves it.

Creative industries like fashion and interior design are constantly inspired by the many shades that have since been produced. Cobalt, cyan, indigo, turquoise, teal – the list goes on, and the fun never stops.

How to work blue into your home

If you also love the colour blue, or one of its many variations, then make it the highlight of your home! Blues are always trending, so it's hard to select wrong!

Like all colours, blue has the amazing power to subtly control our minds, but it does so in a friendly way. It has been known to get people to calm down and just relax. This means that it is incredibly versatile and can be used in virtually any room you want. However, if you really want a soothing look for your bedroom, lighter shades of blue, like Resene Comfort Zone will be perfect. Blue can also be great in the kitchen if you're trying to cut back because, as we said earlier, it's an unnatural colour. It's sends an unappetising signal to the brain, therefore helping to curb snack cravings. How amazing is that?

This entry was posted in Decorating Inspiration. Bookmark the permalink.