Yes, the colour of your bedroom is affecting your sleep 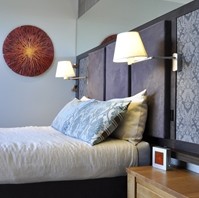 Between the cat pawing at your bedroom door and the glare of the street lights, there are plenty of things preventing you from getting a good night's rest. But what about the colour of your room?

Travelodge recently conducted a survey of 2,000 Britons, and discovered that people with blue-painted bedrooms sleep, on average, seven hours and fifty-two minutes per night. That's right within the seven to nine-hour window the National Sleep Foundation (NSF) recommends adults aged 26-64 should receive on a nightly basis.

How come, out of the 2,000 British participants, did those sleeping in blue rooms get the best rest out of all of them? Travelodge asserted this is because the colour is associated with tranquillity. There's nothing worse than being agitated when trying to go to sleep, so this conclusion makes sense. So ask yourself, how does Resene Bellbottom Blue make you feel?

In regard to the above findings, it's not surprising why the phrase "cool blue" exists. However, it wasn't as if people sleeping in different coloured rooms didn't get enough sleep. Yellow rang in second (seven hours and forty minutes) while green received the No. 3 slot (seven hours and thirty-six minutes).

Why these two colours? Yellow creates a sense of relaxation by fostering a comforting environment when people are trying to get some shut eye. As for green, possibly something like Resene Bottle Green, the shade establishes balance, suppressing stress by preventing people from getting agitated.

Are there any colours you should avoid?

The study pointed to purple and grey as two colours people seeking a good night's rest should refrain from painting their bedrooms.

On average, Britons who slept in purple rooms received a mere five hours and fifty-six minutes of sleep – more than hour below the NSF's recommended amount. Purple tends to encourage brain activity, particularly the portion that supports creativity. This can make it difficult for you to slow down your mind.

Grey was another colour that didn't support healthy sleep habits, with Britons only getting about 6 hours and twelve minutes of slumber.

Should you repaint your room?

So what if your room is brown, grey or purple? Is it really worth it to go out, get a few of buckets of Resene Seachange just for another couple of hours of rest? Research suggests so, as failing to get enough sleep can have lasting negative effects on your health.

Harvard Medical School's Division of Sleep Medicine tackled the issue in a recent blog post, citing insufficient sleep as one of multiple factors that can lead to diabetes, cardiovascular disease and obesity. For instance, the institution cited one study that found people who slept fewer than six hours per night consistently were more likely to be overweight than people who caught eight hours per night.

Not to mention, if nothing annoys you more than a cold, you should probably make an effort to get more sleep every night. Harvard Medical School noted people who received less than seven hours of precious slumber per night were three times more likely to catch a cold than those who received sufficient amount of sleep.

Is changing the colour of your room going to do wonders for your sleep immediately? Maybe not. Other factors in your life may be preventing you from getting some shut eye – don't forget to eat properly and get enough exercise, for example.

Still, there's nothing wrong with trying to create the right sleep atmosphere. Pick a colour that allows you to relax and stop yourself from thinking. The key is to choose a shade that allows the stress of the previous day to melt away.

This entry was posted in DIY/Homeowners Tips and Advice. Bookmark the permalink.